Northern Lights – What you need to know 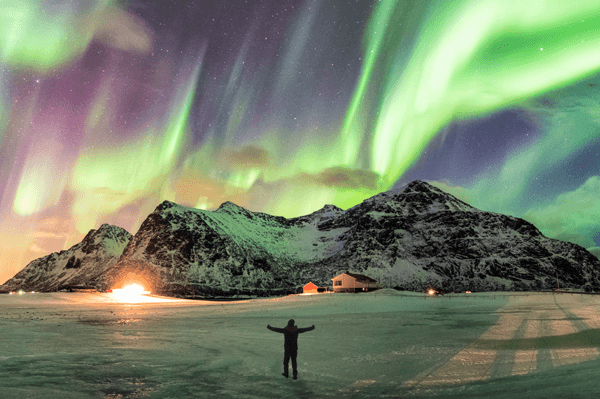 The Aurora Borealis is an amazing natural phenomenon that everyone should aim to see at least once in their lifetime. This spectacular light show is an ethereal, mesmeric and ever-changing performance, an entrancing dance of beautiful colours that light up the night sky. Having the opportunity to witness these lights at first hand is a truly uplifting experience in every sense of the word.

The lights indicate the presence of the fast moving that originate from the sun. The particles are attracted to the Poles, and their varying palette of colours is dictated by the various gases that are present in the earth’s atmosphere. (Image from aurora-service.eu)

As their alternative name ‘the Northern Lights’ suggests, in order to witness this celestial art at its best, you need to head north, and keep going as far as you can, because the further north you are, the more hours of darkness there will be, and therefore the more chance of seeing this elusive spectacle.

The most convenient viewing spots are probably Iceland or, alternatively, Northern Scandinavia. Here you may be lucky enough to experience the lights between the end of September up to the beginning of April.

More adventurous travellers may well consider going on a light searching trip under their own steam. There is certainly something to be said for driving in search of the lights, as if you are unsuccessful in one location, you can simply head further north. Keen drivers often opt to fly to Iceland’s capital and then hit the northern lights trail under their own steam from Reykjavik.

Contrary to popular opinion, you don’t necessarily need an expert to help you find the lights. The only thing that is required are the optimum conditions: cold, dark and clear skies.

Norway is another country synonymous with the Aurora Borealis, with the Lofoten Archipelago being very popular with those travellers seeking a sight of the lights.

A flight to the nearest airport, Evenes, is not expensive, and from there you can hire a car and set off in search of nature’s most spectacular light show. The town of Reine is another great base for light hunters. Sweden –specifically Swedish Lapland and the Luleå archipelago – is another light friendly destination, as is Finland’s Lake Torassieppi.

For long-haul light hunters, one of the locations with the highest incidence of lights is the Yukon region of north-west Canada. This wild territory has almost no light pollution and is a fascinating part of the world to explore by car, lights or no lights.

Of course, Alaska is also famed for its Northern Light shows, and if you may also get to meet the local wildlife which includes wolves, moose, snowcats and even the occasional bear!

If you are hoping to see the lights closer to your home, you could be in luck.

Scotland is graced with regular visits by the Northern lights, and clearly the further north you can get the better your chances. Shetland, for example, is located just four hundred miles from Artic Circle; the Orkneys and Caithness Coast are also good bets.

For the very best chance of catching a glimpse of the lights, travel up in January. If you drive you will be able to chase the lights to your heart’s content, by road and to the islands via the ferries following the extremely helpful free text messages offered by the Aurora Watch UK app. (Android / iOS)

So don’t think about it so much. If you want to take photos like these and live an experience you’ve never had before, just take your car and travel north.

You’ll have on of the best stories to tell.