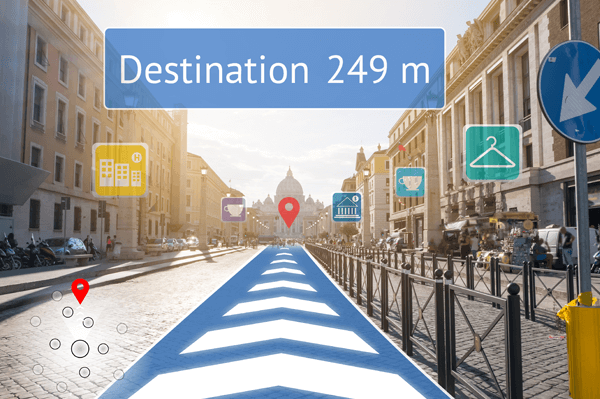 Augmented Reality or AR, where a simulation is laid on top of the real world, has the potential to change every aspect of our lived reality. With this change comes new opportunities for private industries to innovate. Here we’ll discuss five great things augmented reality can offer the automotive industry.

Ever wished that your car windscreen could be like a video game screen, where handy information about everything around you can be displayed right in front of your face? Augmented reality will allow for important information to be overlaid on your outside view, providing a super smart heads-up display.

Auto technology designers Harman have built an AR driving info system they call LIVS. The system will gather live data about things like street signs, braking and accelerating, other vehicles, and so on, and display them in front of the drive through a simulated video.

Imagine being able to experience what it’s like to drive a car without actually needing to get behind the wheel. Augmented reality will allow car companies to give you a simulated test drive experience so you can try before you buy without the risk of crumbling your unbought car against a lamppost.

Both Jaguar and Volkswagen are working on technologies that will allow customers to experience their vehicles without actually getting inside them. Volkswagen is offering a mobile app with 3D graphics. Jaguar has created an AR advert that also works via your smartphone.

Imagine if you didn’t have to travel to a showroom in order to view a car; soon, car dealers will be able to bring the showroom to you. Instead of travelling to a lot and wandering around in the cold amongst the real cars, a dealer could project the models on offer one by one into your driveway, so you can see how they look in front of your bay windows. Hyundai is already making use of this new sales strategy.

The integration of augmented reality technology into the design process will allow car creators to experiment with different design options at a much lower cost. Bodywork designers, for example, can show what aesthetic changes would look like without having to create concept models.

Volkswagen has created an AR system that allows information about vehicle components to be laid over the design models, allowing for component analysis without having to build prototypes. BMW has built wearable displays for their engineers that show them what to do next and which tools are needed.

Communication between drivers has never been easy. It generally degenerates into shouting, waving and eventually rude hand gestures. The inability of drivers to communicate crucial information leads to frustration, confusion and anger. But the rise of augmented reality may help spell the death of road rage.

Imagine if you could send a message to a fellow driver that would pop up on their screen. Imagine if you could highlight an obstacle ahead on the road to them: “Slow down! There’s a car broken down up here!”. The roads could become a much more friendly environment.